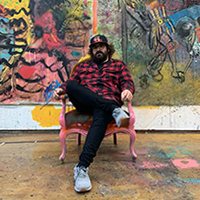 Taking inspirations from life, love and religion, Paul Hunter Speagle creates expressive and colorful works that reflect his passions and beliefs. Working across paintings, sculptures as well as interactive and public installations, Speagle is a versatile artist who explores the world through his works.

Stemming from underground skateboarding, snowboarding, street and comics culture, Speagle’s canvases are filled with intense coloration that heightens a pervasion tension – evoking urban and rural environments of the US while experimenting with internal painterly dynamics around light, brushwork and compositions. Much of his works are inspired by symbolism motifs, Native American totems, outsider folk art, ancient mythologies as well as biblical narratives, commenting on the transcendent of time and the issue of human mortality with his unique and painterly style.

Born and raised in Hickory, North Carolina, Speagle started painting as a young teen and won the Paul Whitener Painting Contest at the age of 12. He gained a scholarship to study at the Savannah College of Art and Design (SCAD), where he earned a BFA in painting in 2005 and an MFA from the School of Visual Arts in New York City in 2012. In 2018, he had his first museum solo exhibition Walking the Dog, at the Hickory Museum of Art. In recent years, Speagle started exploring the possibilities of public murals. He was commissioned to participate in many mural projects, including the large-scale historical mural, the Miracle of Hickory (2019) and a collaborative mural for Art Basel Miami Beach 2019. Speagle is the founder of the artists-led organization ATAC Gallery. The artist currently lives and works in Hickory, North Carolina.